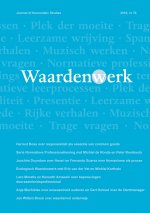 The Listening Society. Responsivity as the Essence of the Common Good

In this paper, I want to explore and to defend two claims: A) That political democracy can only thrive and prosper if it centers around a conception, or competing conceptions, of the common good, and B) that in the age of ethical pluralism such a conception cannot be substantially fixed. Instead, the most promising conception of the common good lies in the idea of a society that is capable and willing to make the art of listening and answering the dominant mode of its political operation, or of its relating to the world. Hence, the common good is realized when a society’s dominant mode of social, spatial and temporal existence can be described as a mode of listening and answering a) to its citizens, b) to its history, c) to its surrounding nature and d) to those groups or formations that are experienced as ‘others’. Thereby, the mode of listening and answering is not supposed to delineate a state of harmony or unity, but includes forms of contestation and dissonance by conceptual necessity.