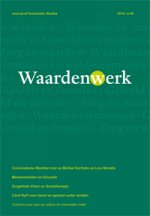 A model of psychological well-being is described. It was built on the convergence of numerous conceptual formulations as well as ties to distant philosophical perspectives. The six components of well-being that constitute the model are defined. Together, they reflect ideals of optimal functioning that are also present in humanistic formulations. Empirical findings about how well-being changes with aging are then reviewed. While vulnerabilities are evident in certain areas (purpose in life, personal growth), some individuals show resilience in these domains. Importantly, this capacity to remain purposefully engaged bodes well for multiple indicators of health. How well-being varies depending on educational status is also reviewed, with emphasis on psychological costs associated with underprivileged lives. But again, some educationally disadvantaged individuals are resilient (i.e., have high well-being), and this profile is accompanied by benefits for health. The final section examines two promising future directions in well-being research: probing the neuroscience of reported well-being (i.e., what brain mechanisms are involved) and initiating efforts to improve well-being (i.e., intervention work being conducted in clinical contexts, schools, and community settings).